From The Garden To The City Blog Tour - #2 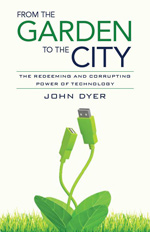 What the what?!  Wow.  I’d love to end my post here, but then it wouldn’t be much of a post, would it?
In Chapter 1, John relates a ministry story involving a projector and Bible study.  Then he steps it up a notch and starts questioning long held “traditions” in Christian Education.  Now, because this is my field of expertise I was a little on edge, I was ready to jump all over him for stepping on my toes.
“But, but, but…..but…..we’ve always done it this way!”  That little voice in my head is screaming.
The printed Bible…that’s what I was all up in arms about.  John says that his students didn’t bring their Bibles to youth group but instead were content to simply read it from the screen.   It concerned him at first…but then he realized that before the advent of the printing press people didn’t have their own Bibles they listened to the Word.  Nevertheless, I’m still all in an uproar.  Then, Dyer rocked me to my core with this statement:

“While God’s words are eternal and unchanging, the tools we use to access those words do change, and those changes in technology also bring subtle changes to the practice of worship” (pg 25).

“It was different.”
That was the response from a recent visitor when asked what they thought of our worship service.
“I like to hold a hymnal.”
That story hit home today.  I was being just like that visitor – I was complaining because I thought it was “sacrilegious” that John was suggesting that we should be okay with students not bringing their Bibles to youth group.  Of my attitude, Dyer says this:

“Rather than taking our cues about technology from the Scriptures and the outline of God’s plan for humanity, we seem to be locked in a cycle of questioning the really, really new but accepting the just barely old.  We question the young for the blind acceptance of the latest gadgets, but we do so driving our computerized cars to and from church sipping on coffee grown on another continent” (pg 28).

Again – wow!  What a statement.  Dyer concludes with pointing out the progression of the Bible, and thus the title of the book.

“At one end of this story is a pristine garden prepared by God for humankind to develop and transform.  At the other end is a glorious, heavenly city full of human creations, art, and technology.  At the center is our Savior Jesus Christ crucified on a cross, the most horrific of all technological distortions, built by transforming a tree from the natural world into a tool of death.  Yet in his resurrection, Christ redeemed even that tool, transforming it into the symbol of our faith that eternally portrays his power over death and sin” (pg 29).

To which, I must respond….
What the what.
Check out the ChurchMag post by Chris Ridgeway here
Posted by J. Burris at 10:34 AM