Do you feel #unloved? 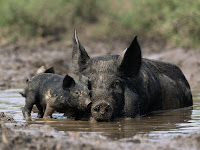 What happens when you don't feel very loved?  You know what I'm talking about - when your world comes crashing down around you - and suddenly everything you held dear falls apart.  At first you are going to "pig it out" and wallow in the mud of self-pity for a week or so...won't you?  You know you will.

But guess what?  Eventually you will pick yourself back up and move on right?  I know you will.  I'm reminded of Luke 15...

Jesus said, “A certain man had two sons. The younger son said to his father, ‘Father, give me my share of the inheritance.’ Then the father divided his estate between them. Soon afterward, the younger son gathered everything together and took a trip to a land far away. There, he wasted his wealth through extravagant living.
“When he had used up his resources, a severe food shortage arose in that country and he began to be in need. He hired himself out to one of the citizens of that country, who sent him into his fields to feed pigs. He longed to eat his fill from what the pigs ate, but no one gave him anything. When he came to his senses, he said, ‘How many of my father’s hired hands have more than enough food, but I’m starving to death! I will get up and go to my father, and say to him, “Father, I have sinned against heaven and against you. I no longer deserve to be called your son. Take me on as one of your hired hands.” ’ So he got up and went to his father.
“While he was still a long way off, his father saw him and was moved with compassion. His father ran to him, hugged him, and kissed him. Then his son said, ‘Father, I have sinned against heaven and against you. I no longer deserve to be called your son.’ But the father said to his servants, ‘Quickly, bring out the best robe and put it on him! Put a ring on his finger and sandals on his feet! Fetch the fattened calf and slaughter it. We must celebrate with feasting because this son of mine was dead and has come back to life! He was lost and is found!’ And they began to celebrate.
“Now his older son was in the field. Coming in from the field, he approached the house and heard music and dancing. He called one of the servants and asked what was going on. The servant replied, ‘Your brother has arrived, and your father has slaughtered the fattened calf because he received his son back safe and sound.’ Then the older son was furious and didn’t want to enter in, but his father came out and begged him. He answered his father, ‘Look, I’ve served you all these years, and I never disobeyed your instruction. Yet you’ve never given me as much as a young goat so I could celebrate with my friends. But when this son of yours returned, after gobbling up your estate on prostitutes, you slaughtered the fattened calf for him.’ Then his father said, ‘Son, you are always with me, and everything I have is yours. But we had to celebrate and be glad because this brother of yours was dead and is alive. He was lost and is found.’”  - Lk 15:11-32, CEB

A couple weeks ago I lost my job with no warning.  I don't know that this was so much a financial crunch thing (because I'm sure finances were involved) but it was just the way it was handled (or not handled).  I was (and still am) hurt.  It was a phone call and - we would like you to stop working here effective immediately.  Talk about a crushing blow...there was so much I had planned to do - that's hard to gather.  It's hard for me to wrap my mind around.  But today as I was cleaning up my bedroom - I suddenly realized something - as I picked myself up out of my self-pity mud puddle - I don't want that job back.  Does that mean that I don't miss my co-workers or the relationships that will never really be the same?  No - because I will miss them dearly - possibly more than they or I  will ever realize.

You see, I needed to recognize that God doesn't take steps backwards.  God is a progressive God (can I make theological statements like that here?  I hope so - so I don't lose my 2 followers).  God is, as pastor/author Mark Batterson puts it in his book In A Pit With A Lion On A Snowy Day (I'm not going to post a page number because that would require me to go into my boxes in the garage labeled church office and find it - but you can buy the book here) "God is in the resume building business".

God is progressive - he is into moving forward - he isn't "going to take something away" and not replace it with something better.  Is your God a progressive God?  Do you feel like God took something away from you?  What if he needs to make room for something better?  I know somethings are hard for us to grasp - and maybe things won't make sense this side of heaven.  Perhaps that break up or emotional hardship is helping you to make room for God.  Those good things in life pale in comparison to God.  Trust me, I know about young love, and I know about losing loved ones too.  And while nothing can ever really replace them here on Earth...the importance of finding Jesus Christ as Lord and Savior...is something you will never get over.

So...do you feel unloved?  You're not.  I promise - no matter how alone we feel - God is always there.  He is waiting with his arms outstretched, camped out on the road, waiting for you to come home to the comfort of his arms.  You don't need to clean up to meet him - just run.