Now that we have Halloween out of the way - we move right onto Christmas.  That seems to be the sentiment today.  Aren't we missing something?  Didn't we forget a holiday there?  What about Thanksgiving?  Are our lives that great that we don't have anything to be thankful for?  Shouldn't it be the opposite?  I think it might.

Thanks to our friends at the History Channel (here is the original article)...

"Halloween's origins date back to the ancient Celtic festival of Samhain (pronounced sow-in). The Celts, who lived 2,000 years ago in the area that is now Ireland, the United Kingdom and northern France, celebrated their new year on November 1. This day marked the end of summer and the harvest and the beginning of the dark, cold winter, a time of year that was often associated with human death. Celts believed that on the night before the new year, the boundary between the worlds of the living and the dead became blurred. On the night of October 31 they celebrated Samhain, when it was believed that the ghosts of the dead returned to earth. In addition to causing trouble and damaging crops, Celts thought that the presence of the otherworldly spirits made it easier for the Druids, or Celtic priests, to make predictions about the future. For a people entirely dependent on the volatile natural world, these prophecies were an important source of comfort and direction during the long, dark winter."

Originally called All Hallows Eve for the day before All Saints Day, which is today (Nov. 1st), where as a United Methodist I/we: 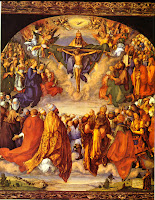 "It is a day to remember the saints, "saints" by the New Testament meaning of "all Christian people of every time and place." It is a day to celebrate the communion of saints as we remember those who have died, both in our local congregations and throughout the Church universal" (ministry matters article)

All Hallows Eve has since migrated toward a secular holiday - eventually becoming Halloween as we know it today.

All Saints day is a day of celebration - of thanksgiving.  Why do we forget Thanksgiving?  Why are we so quick to dismiss the holiday?

Do we not realize we are missing the opportunity to celebrate?

I encourage you to be thankful this month - God has given each of us gifts that are a blessing to us.  Remember them this month.